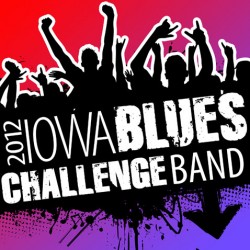 Congratulations goes out to The Pain Killers, Serious Business and The Mississippi Misfits on their advancement to the Final round of the 2012 Iowa Blues Challenge to be held Saturday, May 26th, 2012 at the Downtown Marriott at 700 Grand Avenue in Des Moines, Iowa.

Three bands will each play a 45 minute set in the order listed below, starting at 8:30 PM. A panel of 5 judges will determine the placement of the bands that night.

Just like the name says–Here to kill the pain. The Pain Killers formed in January 2012 in Des Moines doing mostly original songs. The Pain Killers features singer/songwriter Jeff Banks on vocals and guitar, Jon Locker on bass, and George McCutchen on drums. Ths band has one simple philosophy–LET THE MUSIC SPEAK FOR ITSELF!

Serious Business was formed mid-summer 2010 by the founder/rhythm and lead guitarist of “The Pena Bros Blues Band” John Pena. With 38 years of professional experience under his belt, John Pena decided to form another Blues Band, and began hitting the local blues jams in search of highly experienced players with the fire in their souls it would take to create a blues band that audiences could easily consider the perfect line-up of musicians dedicated to keeping the blues alive and well.

He added Perry Hultgren on keys and then Ron LaPuma for vocals/rhythm, lead guitar and song writing. On bass, John O’Meara, joined. He is highly respected throughout the Quad City area and comes with an impressive 30 years experience.

“Serious Business” immediately began working on its own unique style of expressing the type of blues one can only feel in the hearts and souls of its presence. Along with a fusion of Boogie, R and B and Soul, “Serious Business” is always ready to rock the house.!!!

The Mississippie Misfits are a recently formed trio whose members share a mixture of many influences. While Blues is their core, you will hear rock, soul, funk, New Orleans, and Latin flavors in their music. The Mississippi Misfits feature original material mixed with a variety of cover tunes. Their Live performances are high energy and focus on crowd connection. They like to mix it up and keep things interesting by allowing the set list to have a variety of moods. Their intention is to stick to the blues but cover all of the bases.

The Iowa Blues Challenge features one of the finest prize packages, for a contest of this kind, in the country. Prizes are awarded to the top bands, including—cash, travel expenses, recording time, as well as spots in the 2012 Mississippi Valley Blues Festival in Davenport, IA and the International Blues Challenge in Memphis, Tennessee in February, 2013.