Join us Saturday, March 4 for the Bel Airs with a special opening performance by The Soul Searchers! Showtime is 7 PM (doors at 6PM) at Noce, 1326 Walnut St. $20 general public / $15 CIBS members. All Ages until 9PM.

Fronted by brothers Dick and Dave Pruitt on bass and electric guitars, with Michael Cherry on drums, The Bel Airs play a danceable mix with an authentic but eclectic bluesy-country-soul-and-rock-n-roll sound influenced by the likes of Wilson Picket, Slim Harpo, Howlin’ Wolf and Johnny Cash.

?Living on the road and playing clubs from “Austin to Boston”, the Bel Airs are carrying on the tradition of American Rhythm and Blues. The band is fronted by brothers Dick and Dave Pruitt on bass and electric guitars. Growing up on country soul and rock-n-roll, the Pruitt brothers have developed a harmony vocal style all their own. They have been performing together for more than 30 years, wowing audiences nightly with their unique brand of music- leading one reviewer to refer to them as the “Everly Brothers of Blues.”

With four acclaimed albums and performances at festivals and night clubs across the USA as well as England, France, Belgium and Spain, the band continues to travel extensively. The Bel Airs’ musical approach and superbly crafted showmanship make for a more than memorable concert whenever they appear. 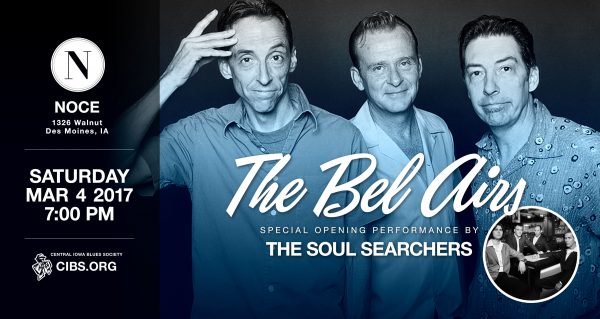