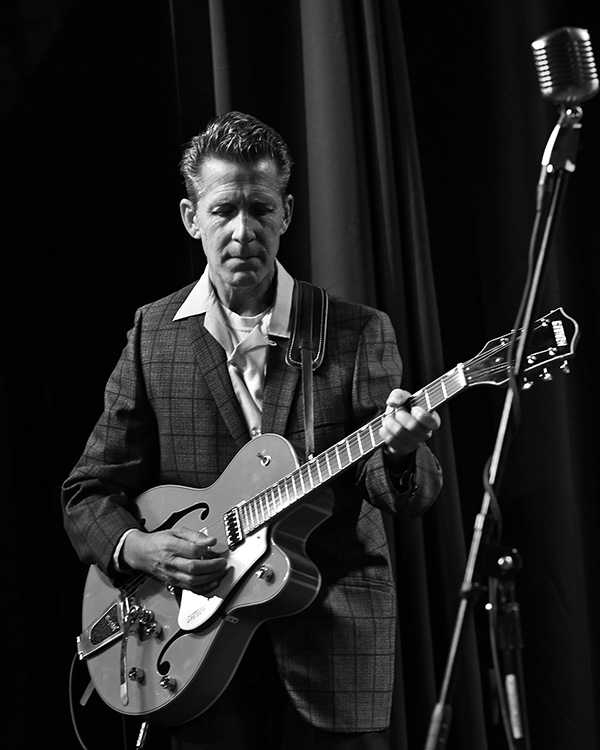 A Des Moines resident and Roosevelt graduate, Scott Eggleston has made significant contributions in performing, supporting and promoting blues music in Iowa for over 30 years.  Scott started playing blues in various bands in 1988 after graduating from the University of Iowa.

Scott fronts the hard swinging band, The Soul Searchers. Under Scott’s lead, the Soul Searchers have mastered the old-school, vintage style of the 1950’s and early 1960’s and have become a well-known and sought after blues act in the region. Scott, known for his authentic blues guitar tone, has been playing guitar and singing with the Soul Searchers since the early 1990s and have maintained a weekly Thursday night gig at the Greewood Lounge in Des Moines for the past several years.

In 1994, The Soul Searchers won the Iowa Blues Challenge and were also finalists in 2006 and 2008. They have appeared on the mainstage at Davenport’s Mississippi Valley Blues Festival, have performed several Jazz in July concerts, and have been featured on Iowa Public Radio and Iowa Public Television. The Soul Searchers have also performed at various Central Iowa Blues Society Blues events including the 25-Year Anniversary Celebration and the Winter Blues Festivals multiple times. The band has toured and performed onstage with Pieta Brown, Bo Ramsey, The Nadas, Sam Salomone, The Turner Center Jazz Orchestra, R.J. Mischo, Rockin’ Johnny, Aki Kumar, Jim Viner’s Incredible B3 band.

The Soul Searchers are known for their boogie-woogie blues. The band’s core members include guitarist/singer Scott Eggleston; upright bassist, Erich Gaukel; and drummer Mark Grimm. When the band performs as a quartet or quintet, they are joined by saxophonist Nathan Peoples (also with the Blue Band) and/or pianist/organist Neil Stoffregen (also with The Nadas).

In 2017, The Memphis-­based Blues Foundation named The Soul Searchers’ self­-titled CD one of top 10 self­-produced blues albums. To date, the CD has been sold in 13 countries. The band has also released two other albums including: Boogie Woogie Nighthawk and Lounging at the ‘Wood.

Scott, a self-taught guitar player and vocalist, has been featured in two books written by students at Drake University in Des Moines as a part of a blues class. The books are titled:  Life in the Key of E Minor: Conversations with the Blues and Life After Blues-On-Grand: Finding the Blues in Des Moines.