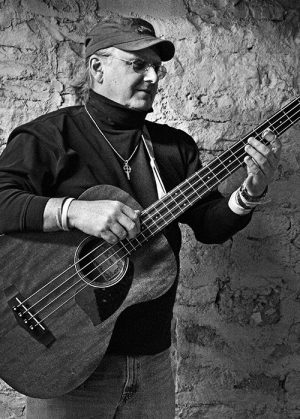 Dan began playing in the 70s in the band Changes, beginning his long partnership with Dennis ‘Daddy-O’ McMurrin. The late 70s saw the Iowa Rock ‘n Roll Hall of Fame band The Do’s and Don’ts utilizing his talent. Dan hit the road in the 80s performing with Men Working (Men Rockin’) with U2 keyboardist Terry Lawless and Falcon Eddy from Waterloo. In 1987, Johnson’s band Made Ya Look toured in the Midwest and he found himself in Omaha from 1988-1991. He returned to Cedar Rapids in 1992, and partnered in The Recording Studio, inc., known as Smithfield Studio.

Dan has performed in many events in the 25 years since, playing with The DNA Blues Band, McMurrin & Johnson, The Blue Band, D-Dog and The B-Bits, 4BOXOROCKS, and The Demolition Band. He is also session bassist at Catamount Studio in Cedar Falls, appearing on dozens of records over the years, including a solo CD in 1998, four McMurrin & Johnson recordings, and most of BillyLee and Bryce Janey’s albums.

He was inducted into The Iowa Rock ‘n Roll Hall of Fame in 2007 with The Blue Band and appeared on all the Hot Fudge Records Iowa Blues Compilation cd’s.

He has been involved in the Linn County Blues Society since its inception, helping to organize and promote Bluesmore shows, participating in Blues in the Schools programs, and representing them at charity events. He continues to play on a regular basis with “Daddy-O” McMurrin, Tony Brown, Skeeter Louis, Kevin “BF” Burt, and Bryce Janey.