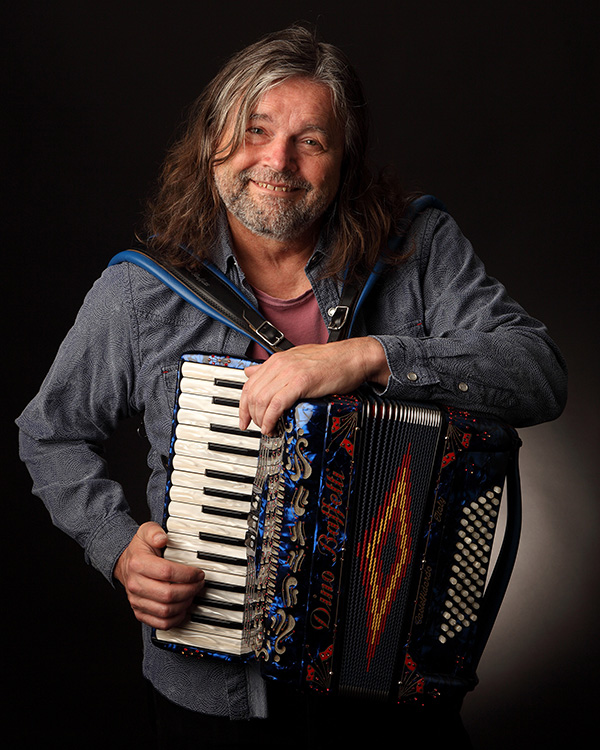 Born in Zagreb, Croatia in 1958, Lorkovic’s initial exposure to music can be attributed to two grandmothers. Antonija, his maternal Grandmother, sang him Croatian, Slovenian and Czech folk songs since birth. During these early years, classical music played in the home constantly due to the influence of his paternal grandmother Melita Lorkovic, an internationally renown classical pianist.

Radoslav moved to the United States at age six. He had a foothold on a classical music career when, at age fourteen, he was sidetracked by a blues scale that a friend had taught him.After several years and countless hours of expounding on this spark, Lorkovic began touring at age 20 with Bo Ramsey and the Sliders. Lorkovic entered the band having mastered the styles of boogie-woogie greats such as Albert Ammons, Pete Johnson, Freddie Slack etc.. Ramsey’s influence drove Lorkovic deeper to the core of the blues. The music of Howlin’ Wolf, Muddy Waters and Little Walter shifted Lorkovic’s focus to the basics as he began to draw from the styles of Otis Spann and Pinetop Perkins.

Several years later Lorkovic and Ramsey joined forces with Greg Brown adding musical authenticity to his deep Iowa Roots. At this time Lorkovic was simultaneously brushing up on his classical heritage and looking south to the polyrhythmic sounds of Professor Longhair and James Booker. He had picked up Tex-Mex and Zydeco accordion as well.

Drawing from a multitude of influences ranging from elegant classical and jazz styles to the rawest, most basic blues, country and soul, Radoslav Lorkovic has taken on an unusually broad musical spectrum and refined it into his distinctive piano style. His tenure on the R&B and folk circuits has culminated in nine critically acclaimed solo recordings and numerous appearances on the recordings of and performances with artists including Odetta, Jimmy LaFave, Ribbon of Highway Woody Guthrie Tribute, Greg Brown, Richard Shindell, Ellis Paul, Ronny Cox, Dave Moore, Andy White and Bo Ramsey.

He tours the world regularly appearing at prestigious events such as the Woody Guthrie Festival; Womad, Winnipeg, Calgary; Edmonton and Ottawa folk festivals; Falcon Ridge Folk Festival; Mountain Stage; and eTown as well as a litany of Italian castles and villas. He has performed at Carnegie Hall, the Kennedy Center, the Carson Daily Show and two solo appearances on A Prairie Home Companion.

Radoslav was the founder of a tiny record label in Iowa City called Shed Records. It eventually morphed into the better known Trailer Records. During his tenure, Bo Ramsey, Kevin Gordon, High and Lonesome, Robert ‘One  Man’ Johnson, and Joe Price all had titles on Shed.

An international ambassador of the ‘Iowa Sound’ and 45 plus year career has given Radoslav many great performance opportunites. He has played with Odetta, Shawn Mullins, Greg Brown, Jimmy LaFave and others. He had a brief stint with the Holmes Brothers and he and Bo Ramsey backed Bo Diddley for a performance in Iowa City.