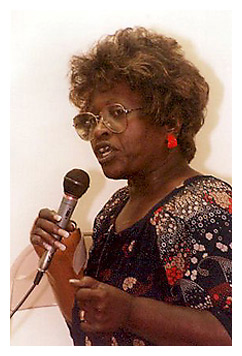 Rose Marie Webster (formerly Gaiters), is a singer and pianist from Des Moines. She started singing in the church, and her father was a Baptist minister. Influenced by Dinah Washington, Nancy Wilson, and CeCe Wynans, she performed the Blues, along with Jazz and Gospel, professionally for close to three decades around Des Moines. Some of the venues that she played at, included the White Shutter Inn, Tony’s Lounge, Hotel Ft. Des Moines, the Wakonda Club, Phyllis’, and the Sepia Club. She is known for her ability to ad lib words, adding her own stamp to the songs she would sing. She has also performed community work, and at benefits, including for Drake University. She participated for two years in the Women In Jazz series of concerts, organized by Suzie Miget. She performed with the virtuoso of the Hammond organ, Sam Anthony (Salomone). Even though Rose Marie has been concentrating on Gospel as of late, she is thrilled to be a new member of the Blues Hall of Fame, and is looking forward to performing at the induction ceremony at Blues On Grand in December.