The dedication of the Iowa Blues Hall of Fame display at its new home in the Hawkeye Elks Club, 1401 Walker St took place during the Sumpin Doo show on Saturday, September 6th.  Sumpin Doo burned up the room for an appreciative full house and IBHOF members George and Gil Davis were joined on stage by fellow Hall members Steve George and Ron McClain, and Hall members Harlan Thomas and Bob Pace were also in the house.  The Elks Club welcomes all Iowa blues lovers to come check out the new display during their public hours – and while you’re there, please feel free to knock back one or two of your favorite adult beverages and show some support to our appreciative new hosts.  For an extra special experience stop by on the first and third Saturdays of each month while Sumpin Doo and friends will be jammin’ it out from 4 till 7 pm.  News flash! – we’ve just been informed that there will be live blues at the Elks on the 2nd & 4th Saturdays as well, courtesy of Heath Alan, Matt Woods, David Altemeier, and Dwight Dario!!!

Thanks to the Hawkeye Elks Lodge 160 & Rose Temple 33, and particularly George Davis & Ron McClain for their invaluable help in obtaining a new location for the exhibit, and Terry Cole, Marty Enslow and Jeff Duskin for its construction and installation.  The display is designed in a manner to easily facilitate transportation of the photos to future Hall of Fame induction ceremonies in the near-term,  with future plans also in the works for a smaller, portable companion display that would be suitable for exhibition at events all over the state, a goal that will likely take a couple years to realize.  Stay tuned for the announcement of the 2014 Class of Inductees in November. 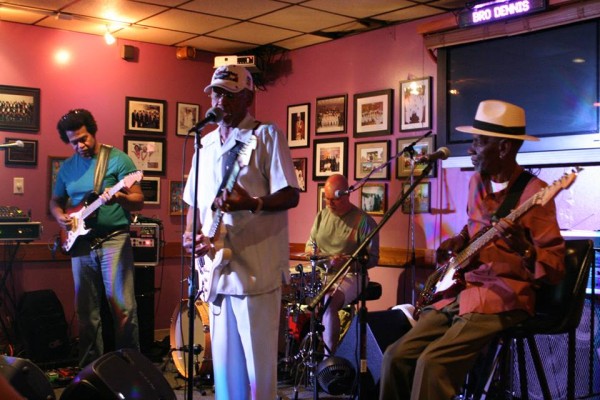 The new IBHOF exhibit at the Hawkeye Elks lodge